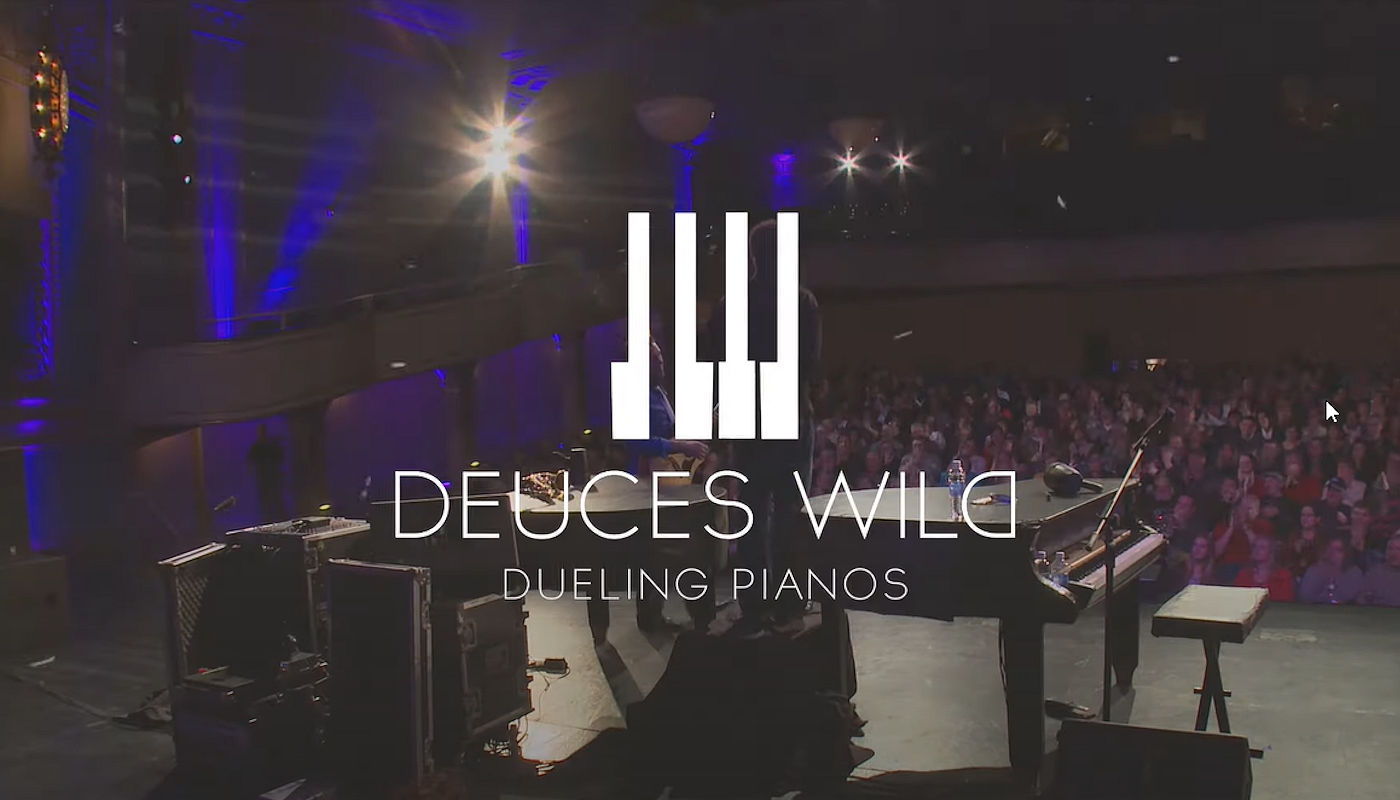 Don’t miss Deuces Wild Dueling Pianos at the Historic Holmes Theater, 806 Summit Ave, Detroit Lakes, MN on the evening of January 21, 2022. There are dueling piano shows . . . and then there is DEUCES WILD! It’s a clap along, sing along musical comedy show. Nobody does it like Dave and Ted!

For a pair of self-taught pianists from Minnesota, David Eichholz and Ted Manderfeld have mastered the sophisticated nuances of burlesque’s best ribald and bawdy traditions. Deuces Wild! Dueling Pianos offers a Las Vegas-style show of comedy and extensive audience participation featuring an unlikely and surprising mix of music and parodies that range from classic rock and country to rap and show tunes. The key to their marathon of musical comedy, however, is the unabashed and completely liberated participation of audience members from 18 to 80.

For over 19 years Dave and Ted have traveled from coast to coast as the most sought after Dueling Piano act in the country! There is no one like them! Deuces Wild! Dueling Pianos defies all expectations and experiences in a dueling piano show. Dave and Ted take you on a variety class act adventure, where the audience paves the way to a wild and zany performance. Completely customized for each venue and audience, the show dares to go where you take it with comedy, music, and a whole lot of improv. Whether twenty-five or eighty-five, your audience will be guaranteed to be on their feet and part of the action!

David has been performing the dueling piano concept for over 18 years and prides himself on being able to hold the attention of his audience from the moment he takes the stage till the last note of the encore. You won’t find a more polished entertainer with such a wide variety of skills.

Son of a miner from the northern woods of Minnesota, David Charles Eichholz is a versatile, self taught musician who plays the piano, guitar, saxophone, harmonica, trumpet and countless other instruments. David was also part of the “Pringles” Award winning band “City Pretty” as well as the band “Rave On!”. He was featured internationally on the Swedish television show ‘Christine’. He was then recruited by Little Ditty’s, Dueling Piano Bar at the Mall of America in Minnesota where he performed four nights each week for five years. David also recorded and produced the sound track to the “Prime Target” video game (50,000+ copies sold).

Ted got his start in Deuces Wild by walking out of his day-job and demanding an audition. Although he hadn’t previously played in a dueling piano style show, his amazing showmanship and obvious ability to perform as a world class entertainer blew away the competition! Since then he has played thousands of dueling piano shows with performances all over the country! When not on the road with DWDP, Ted spends his time as a producer of sold out shows, including the Billy Joel and Elton John tribute show “Eye 2 Eye,” and the ever popular annual “Rock n Roll Xmas Spectacular,” which he co-produces with former Jonny Lang guitarist Paul Diethelm.

Ted also spends time in the studio as jingle writer, recording artist, and producer of both his first CD “Gather Us In,” and his Rock and Roll Xmas CD, “Trim My Tree.” and “RRXS – Live at The Paramount” CD. He’s been an actor and a game show host! Whether it be in front of thousands of people opening for HBO’s Dennis Miller, or selling out theaters with Deuces Wild nationwide…Ted has consistently proven that he truly is a showman’s showman and musician’s musician!