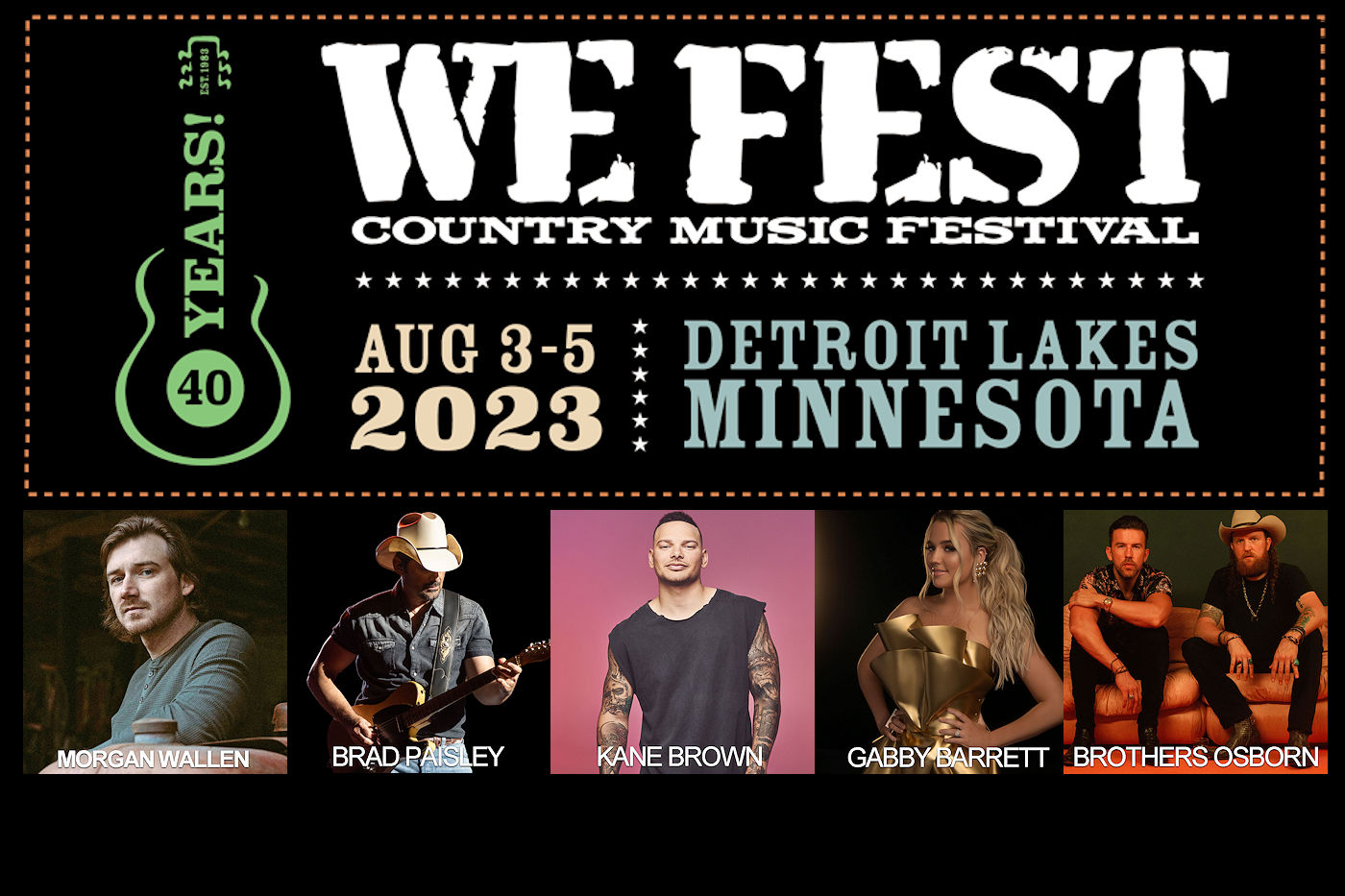 Since WE Fest began in 1983, it has been one of the leading country music festivals in the nation. Twice nominated for the Country Music Association’s prestigious Best Special Event award, the WE Fest is widely regarded as one of the most outstanding events of its kind in the nation.

Morgan Cole Wallen (born May 13, 1993) is an American country singer and songwriter. He competed in the sixth season of The Voice, originally as a member of Usher’s team, but later as a member of Adam Levine’s team. After being eliminated in the playoffs of that season, he signed to Panacea Records, releasing his debut EP, Stand Alone, in 2015.

In 2016, Wallen signed to Big Loud, releasing his debut album, If I Know Me, in 2018.[6] The album includes the singles “Up Down” (featuring Florida Georgia Line), “Whiskey Glasses”, and “Chasin’ You”. If I Know Me reached No. 1 on the Billboard Top Country Albums chart.[7] Wallen’s second album, Dangerous: The Double Album, was released in January 2021, and in February 2021 became the only country album in the 64-year history of the Billboard 200 to spend its first seven weeks at No. 1.[8] It spent a total of ten weeks at that spot, the first album to do so since Whitney Houston’s Whitney in 1987.[9] The album included Billboard No. 1 singles “More Than My Hometown”, “7 Summers”, and “Wasted on You”.[10]

At the outset of his career, Wallen underwent a personal stylistic shift, adopting a distinctive mullet and a look that Kelefa Sanneh, profiling Wallen’s rise in a piece for The New Yorker, described as “Everyman rock star not just a singer but a character.” Wallen had decided to adopt the retro hairdo after seeing a younger photo of his father with the cut. Wallen’s profile continued to rise, with a growing following on platforms like TikTok, and he developed into an unwitting sex symbol.

Wallen has continued to release new music, and has remained a popular draw on the road. The Dangerous Tour of arenas and amphitheaters was completely sold-out. His single “You Proof” became his second Hot 100 hit and first to reach the top five; both “You Proof” and “Thought You Should Know” topped the country charts. Wallen also collaborated with rapper Lil Durk on the song “Broadway Girls”, a top-15 hit on the Hot 100; he also performed the song live with Durk at MLK Freedom Fest in Nashville.[53] Wallen was a co-writer on the Tyler Joe Miller single “Wild as Her”, released in February 2022, and the Keith Urban single “Brown Eyes Baby, released in July 2022. In December 2022, Wallen released a sampler EP titled One Thing at a Time, featuring three songs he had been working on up until this point, titled “One Thing at a Time”, “Tennessee Fan” and “Days That End in Why”. In 2023, Wallen will expand to stadiums with his One Night At A Time World Tour.

Brad Paisley has earned his place in country music history as one of the genre’s most talented and decorated male solo artists. Over the past 20 years, his songwriting and unmatched showmanship have won him numerous awards, including three GRAMMYs, two American Music Awards, 14 Country Music Association Awards and 15 Academy of Country Music Awards, among many others.

A member of the Grand Ole Opry since 2001, Paisley has written 21 of his 24 No. 1 hits, and in 2008 became the first artist to achieve 10 consecutive Billboard Country Airplay No. 1 singles. The 2010 CMA Entertainer of the Year’s past works have amassed over 3.9 billion on-demand streams. Paisley continues to collaborate with Peyton Manning in a multi-year ad campaign with Nationwide insurance.

Paisley and his wife, Kimberly Williams-Paisley, are co-founders of nonprofit organization The Store, a free-referral based grocery store, which aims to empower low-income individuals and families in the Nashville area.

Kane Allen Brown (born October 21, 1993) is an American singer. Brown first came to the attention of the public through social media. In 2014, he began posting videos of his covers of songs by Brantley Gilbert, Billy Currington, Alan Jackson, and other singers on social media, acquiring a following for his homemade videos on Facebook. His cover of Lee Brice’s “I Don’t Dance” was one early video that gained wide attention. Released on September 30, 2015, his cover of George Strait’s “Check Yes or No” went viral and received more than seven million views. His number of followers on Facebook quickly reached more than a million.

After Brown signed with RCA Nashville in early 2016, the song was included on his EP Chapter 1, released in March 2016. He released his first full-length album, the self-titled Kane Brown, on December 2, 2016. The single “What Ifs” came from this album, and in October 2017, Brown became the first artist to have simultaneous number ones on all five main Billboard country charts. Brown released his second album, Experiment, in November 2018, which became his first number one album on the Billboard 200.

On February 11, 2021, Brown launched his own label, 1021 Entertainment, in association with Sony Nashville. Also in 2021, Brown became the first black person to win Video of the Year at the ACM Awards, which he won for “Worldwide Beautiful”.[61] He was included in 2021’s Time 100, Time’s annual list of the 100 most influential people in the world. More recently, on March 3, 2022, Brown released the song “Leave You Alone”, which he initially previewed on social media in late 2021. Brown announced his third studio album, Different Man, on July 18, 2022. The album was released on September 9, 2022.

Note: Minimum Stay is 3 Nights for We Fest weekend.

Full prepayment is required to guarantee each reservation.
Once prepaid, deposits are non-refundable, and reservations are non-cancellable. No exceptions.
Any “no shows” on the date of arrival, forfeit the full deposit; all remaining reservation dates are released.
Reservations are non-changeable and non-transferrable.
A deposit may not be transferred to another person, nor applied to a future stay.

Parking: We offer GA Parking, GA Accessible Parking, and VIP Weekend Parking. Please review the ticketing descriptions above for more details on these options. Single Day Parking is sold onsite at the event and may not be available based on availability.

Use of cameras in the concert area: Small cameras will be allowed in the venue area. Professional cameras and video cameras will NOT be allowed. This includes any camera with a detachable lens.

Pets at We Fest No pets. Please let your pets at home. They are not allowed in the venue or camping areas. Service animals will be permitted with proper paperwork and registration. For more information on bringing a service animal to the event, please visit the We Fest accessibility page.

WE Fest Shuttle Service Information: The Detroit Lakes Regional Chamber of Commerce has arranged for shuttle bus service to and from We Fest. Save the hassle of all the festival traffic, finding a parking place, and then walking from the parking area.

WE Fest offices are located on the Scenic Soo Pass Ranch, which also contains a natural amphitheater that accommodates up to 50,000 people, including 7,000 reserved seats, and 10 separate campgrounds with a total camping capacity of 35,000 people. WE Fest employs a year-round staff of professional sales, marketing and administrative staff.

Fully developed as a concert venue, the Soo Pass Ranch has a permanent stage and backstage compound, including air-conditioned dressing rooms with running water, catering and production facilities, including permanent sound towers and mix station. The concert bowl also contains 50 permanent concession stands, and locations for dozens of additional portable concessions. The company has invested heavily in developing the concert site, including bringing city sewer and water lines to the ranch, which allows for running water, and permanent rest rooms in the concert bowl.

Best Hotels Near We Fest in Detroit Lakes

WE Fest is a massive country music festival that takes place annually in Detroit Lakes, Minnesota. The host venue is a large plot known as Soo Pass Ranch that affords visitors from all over the opportunity to enjoy three full days of top-notch country music entertainment and a festive environmen. While many attendees prefer to camp on-site, hotels in Detroit Lakes are booked to capacity each year for folks that want to kick back with all the creature comforts of a modern hotel. If you’re looking for the best hotel near We Fest, start with the Detroit Lakes hotel consistently voted top hotel by TripAdvisor Guests. Best Western Premier The Lodge On Lake Detroit is a Lifestyle Lakefront Minnesota Hotel, offering a great location that is directly across Big Detroit Lake from The Lodge (6.5 mi). The Lodge is a natural to host a crowd of We Fest visitors, as it hosts live musical entertainment throughout the year in its Fireside Lobby.

With our modern amenities and thoughtful design, we stand out among other lodging choices in Detroit Lakes, MN. For couples or family getaways, we offer a variety of rooms and suites with king, queen or two queen beds. Our free hot breakfast (currently using Grab & Go Bags while Covid precautions are in place), free local calls, indoor heated pool and fitness center make the hotel a great place to recharge between enjoying Detroit Lakes attractions and activities. View hotel detail.

WE FEST
The Lodge on Lake Detroit