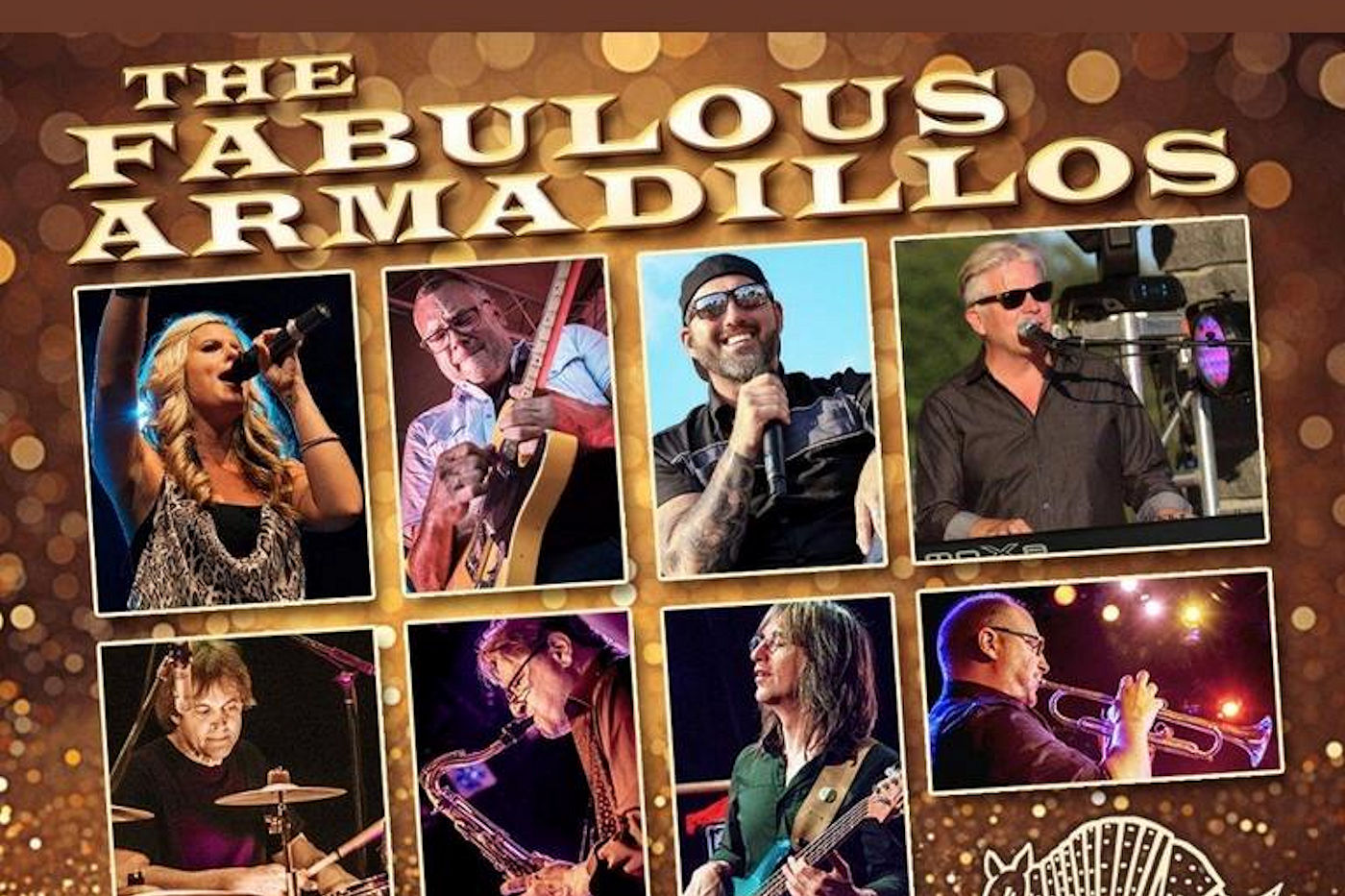 Enjoy the Fabulous Armadillos Party Band show at the Historic Holmes Theater, 806 Summit Ave, Detroit Lakes, MN on the evening of January 19, 2023 as they come together for, well, a party! The band showcases its eight members vocally & instrumentally in a very wide genre of music from the 60s to Today!

The Fabulous Armadillos came out of their shell in 2006 and have since established a large and loyal following in Minnesota and beyond with their spot on recreations of songs from many genres of music from Country to Motown to Heavy Metal to 70’s Soft Rock and play them just like you remember. Close your eyes and you are listening to all those vinyl records again or your AM/FM radio. The idea of the Fabulous Armadillos started with a diverse group of musicians who came together to perform “themed” concerts at the Pioneer Place On Fifth Theater in St. Cloud, MN. Themes like “One Hit Wonders”, “Woodstock”, “Motown”, “Singer/Songwriters”, “Stadium Rock” and more. They have now played 100’s of themes at that theater as well as many regional venues in the Midwest and even in Mexico! Each show gaining them new fans and enjoying their brand of fun and entertaining, yet musically spot on performances. They have brought hundreds of special guests in for their theme shows comprising of local and national talent. COME OUT OF YOUR SHELL and see what everybody has been talking about!

The Fabulous Armadillos also play corporate events, fairs and festivals with their 8 piece group. They also tour 2 TRIBUTE shows – “Takin’ It To The Limit: An Eagles Tribute” (with Collective Unconscious) and “What’s Going On – Songs From The Vietnam War Era”.

Originally formed to perform multi-instrumentalist Jeff Engholm’s solo album, Summit Climb in the year 2000, Collective Unconscious has grown from those humble roots to become one of Minnesota’s premiere groups. Singer/songwriters Nathan “Nature” Nesje, and Muggsy Lauer make up the core of the group with their slick, well blended vocal harmonies. They are joined by composer/keyboardist George Maurer.

Through the years, the band has performed not only their own music, but expanded into a new genre: album shows. Starting in 2005 with performing The Beatles “Abbey Road” from first track to last (Come Together to Her Majesty), with special guest and semi-band member, Stacy Bauer, they jumped into one of their most ambitious projects, The Beach Boys “Pet Sounds”. That album took an ensemble of over 15 musicians playing an astounding array of instruments from Theramin to timpani, and included The Vees and The Half Steps. Other album projects have included Simon & Garfunkel “Bridge Over Troubled Water”, Crosby, Stills, Nash & Young “Deja Vu”, and The Band “The Last Waltz”.

If that wasn’t enough, the group teamed up with The Fabulous Armadillos in 2010 to create a veritable “super group” and have been performing “Takin’ It To The Limit: A Tribute To Eagles”, and “Takin’ It To The Streets: A Tribute To The Doobie Brothers” ever since. And if even that wasn’t enough, members of Collective Unconscious have taken part in groups paying tribute to Zed Zeppelin, Pink Floyd, Paul McCartney and Wings, The Guess Who, The Traveling Wilburys, George Harrison, The Blues Brothers, and John Lennon, as well as performing in plays, pit bands, jazz ensembles, jug bands, and this thing we do each February.