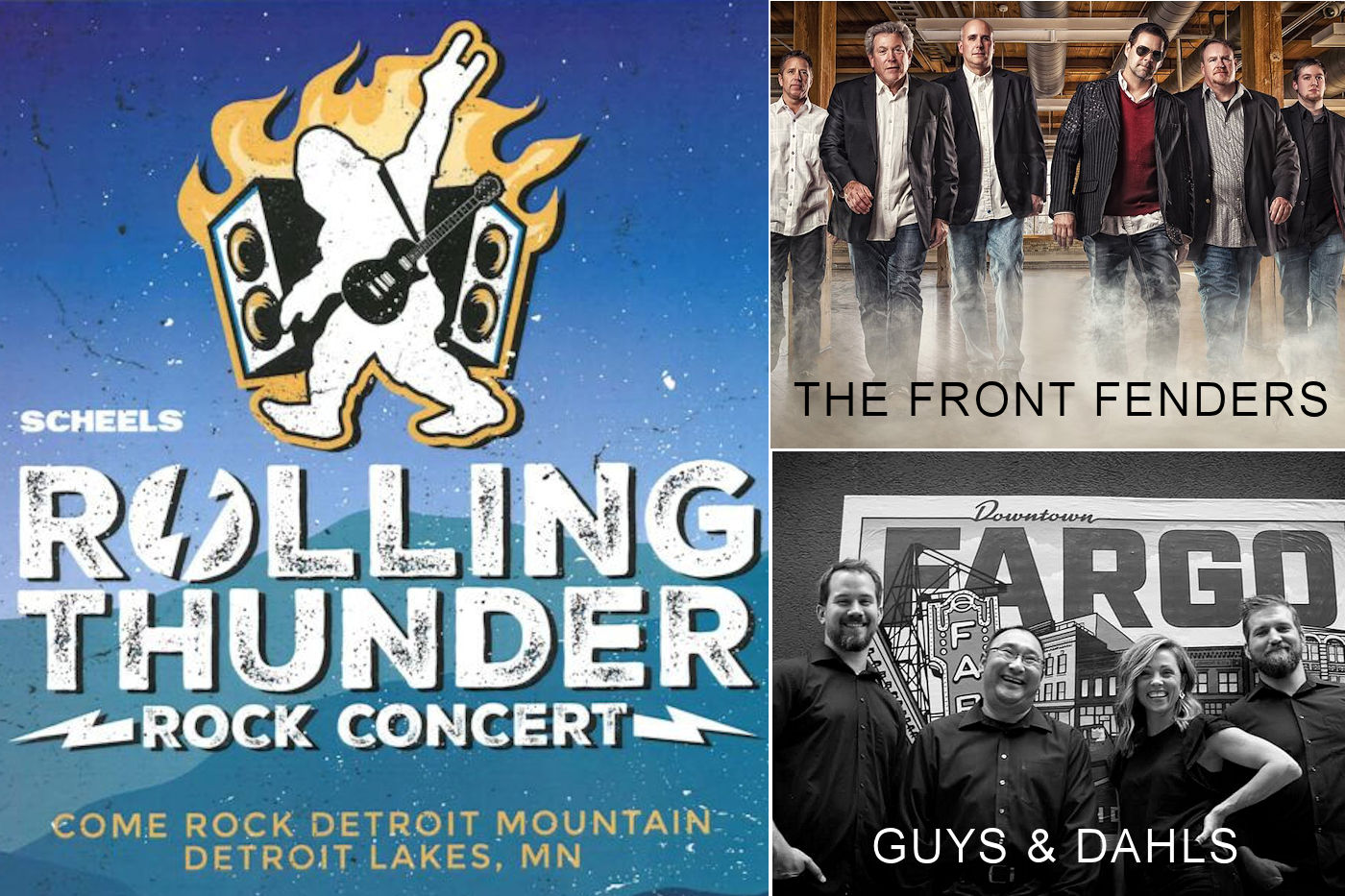 Enjoy the sounds of the DL MountainFest Rolling Thunder Rock Concert beginning at noon on Saturday, September 24, 2022 at the Detroit Mountain Recreation Area in Detroit Lakes, Minnesota. The Front Fenders will open the show playing OUTSIDE at the Mountain, followed by Guys & Dahls. Celebrate with your friends while you replenish with food, drink & great tunes! Open to all ages.

Get to the Mountain early so you don’t the Sheel’s Mountain Fest that precedes the rock concert. Celebrate the great outdoors and everything fun! Enjoy Trail Running/Walking, Mountain Biking, Great Food, Cold Beer and the Awesome Music that await you at beautiful Detroit Mountain Recreation Area in Detroit Lakes, Minnesota. This is less about the competition & more about the company & fun! Come take in the beautiful fall colors of Detroit Mountain in late September with us. DL MountainFest Details

Rolling Thunder Rock Concert Entry Fee
» $10.00 registration (through 9/22 at 11:59 PM US/Central)
» The concert is Free to those who registered to run or ride in the DL MountainFest that starts earlier today. If you just want to go to the concert, there is a $10.00 cover charge.

Mark your calendar today so you don’t miss the DL MountainFest Rolling Thunder Rock Concert or the Sheel’s Mountain Fest at Detroit Mountain in Detroit Lakes, Minnesota in September!

The Fenders play some greats from the 50’s 60’s 70’s 80’s 90’s and some of the new stuff. along with a couple of country favorites…..each song has a life of its own…be it the appearance of the “king” Elvis….a rap in the middle of a 70s classic…to a beautiful ballad…every song “The Front Fenders” plays is one you want to dance to. The Front Fenders have been around for quite a long time now. Longer than their current bass player has been alive, in fact. They play all over the region including the Fargo-Moorhead Metro area, Grand Forks, Lake Country, Bismark; where they play is up to you.

Put together one hot band…get a couple of crazy guys in front…and let the fun begin!! That is “The Front Fenders”. Always ready for a good party “The Front Fenders” deliver a high energy rock n’ roll night of fun. The Fenders play some greats from the 50’s 60’s 70’s 80’s and some of the new stuff. along with a couple of country favorites…..each song has a life of its own…be it the appearance of the “king” Elvis….a rap in the middle of a 70s classic…to a beautiful balled…every song “The Front Fenders” plays is one you want to dance to.

The Guys and Dahls Band is a stylistic variety band born from the love of music in the Dahl family household. Chris and Tarah Dahl created the band Guys and Dahls along with their close friends Cory Loveless and Chris Hanson, with the goal of offering unmatched quality, professional, high-energy musical performances. The members of Guys and Dahls have countless combined years of musical experience and have been performing together throughout North Dakota and Minnesota for over six years at weddings, private parties, and community events.

Throughout the course of the group’s collaboration, they have won over the hearts of music lovers from all walks of life and across genres. While playing at a variety of venues and making countless public appearances, their captivating, high-energy performances have earned them an ever-growing following throughout North Dakota and Minnesota.