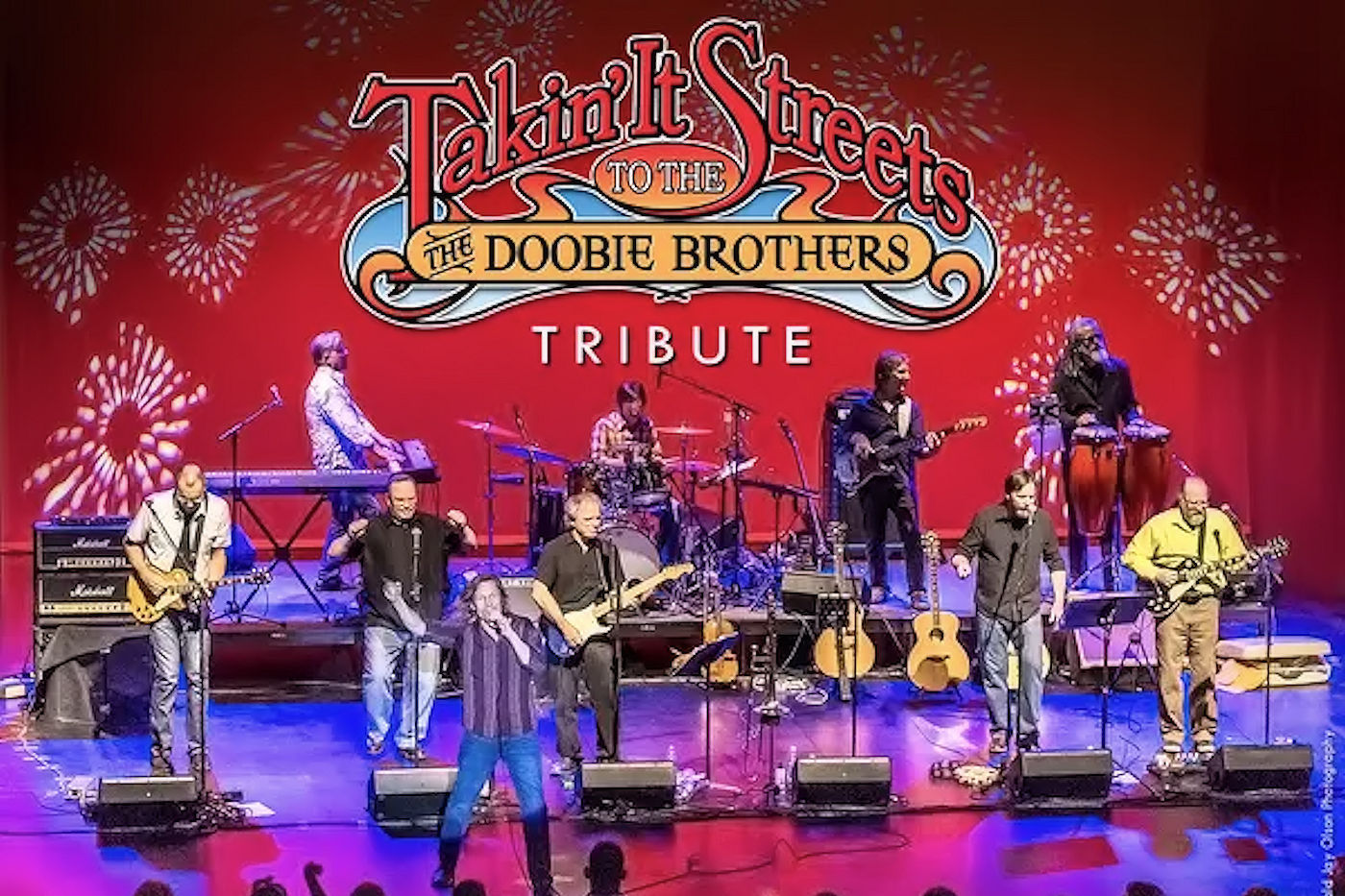 Takin’ It to the Streets- Doobie Brothers Tribute

Takin’ It to the Streets: Doobie Brother Tribute
at the Historic Holmes Theatre

Enjoy the Fabulous Armadillos and Collective Unconscious at the Historic Holmes Theater on the evening of May 12, 2022, as they unite once again to bring you the soul and power of Takin’ It to the Streets: Doobie Brother Tribute. Hear hits like Black Water, Minute By Minute, What A Fool Believes, Takin It To The Streets, and many more.

Formed in the spring of the year 2000 to support lead singer/bass player Jeff Engholm’s first solo CD (Summit Climb), CU performed around central Minnesota as a jam band. A couple of years of Wednesday nights at the Red Carpet Nightclub in St. Cloud, MN firmly established the band’s repertoire, and musicianship, and kept audiences dancing.

During that time they recorded and released a couple of albums of their original material: Collective Unconscious, and The Garden.

A few years later they began performing the Beatles Abbey Road album in its entirety, from Come Together all the way through Her Majesty (years before tribute bands were a thing). From there they expanded on to Simon & Garfunkel’s Bridge Over Troubled Water album (with strings and brass), CSNY’s Deja Vu album, The Band’s The Last Waltz (with a cavalcade of guest performers), and the epically grand album from The Beach Boys Pet Sounds (with a multitude of multi-instrumentalists playing over 30 different instruments).

Eventually, CU joined up with powerhouse The Fabulous Armadillos to perform a show called Takin’ It To The Limit: An Eagles Tribute, which has been entertaining sold-out houses across the midwest ever since.

Originally formed to perform multi-instrumentalist Jeff Engholm’s solo album, Summit Climb in the year 2000, Collective Unconscious has grown from those humble roots to become one of Minnesota’s premiere groups. Singer/songwriters Nathan “Nature” Nesje, and Muggsy Lauer make up the core of the group with their slick, well blended vocal harmonies. They are joined by composer/keyboardist George Maurer.

Through the years, the band has performed not only their own music, but expanded into a new genre: album shows. Starting in 2005 with performing The Beatles “Abbey Road” from first track to last (Come Together to Her Majesty), with special guest and semi-band member, Stacy Bauer, they jumped into one of their most ambitious projects, The Beach Boys “Pet Sounds”. That album took an ensemble of over 15 musicians playing an astounding array of instruments from Theramin to timpani, and included The Vees and The Half Steps. Other album projects have included Simon & Garfunkel “Bridge Over Troubled Water”, Crosby, Stills, Nash & Young “Deja Vu”, and The Band “The Last Waltz”.

If that wasn’t enough, the group teamed up with The Fabulous Armadillos in 2010 to create a veritable “super group” and have been performing “Takin’ It To The Limit: A Tribute To Eagles”, and “Takin’ It To The Streets: A Tribute To The Doobie Brothers” ever since. And if even that wasn’t enough, members of Collective Unconscious have taken part in groups paying tribute to Zed Zeppelin, Pink Floyd, Paul McCartney and Wings, The Guess Who, The Traveling Wilburys, George Harrison, The Blues Brothers, and John Lennon, as well as performing in plays, pit bands, jazz ensembles, jug bands, and this thing we do each February.