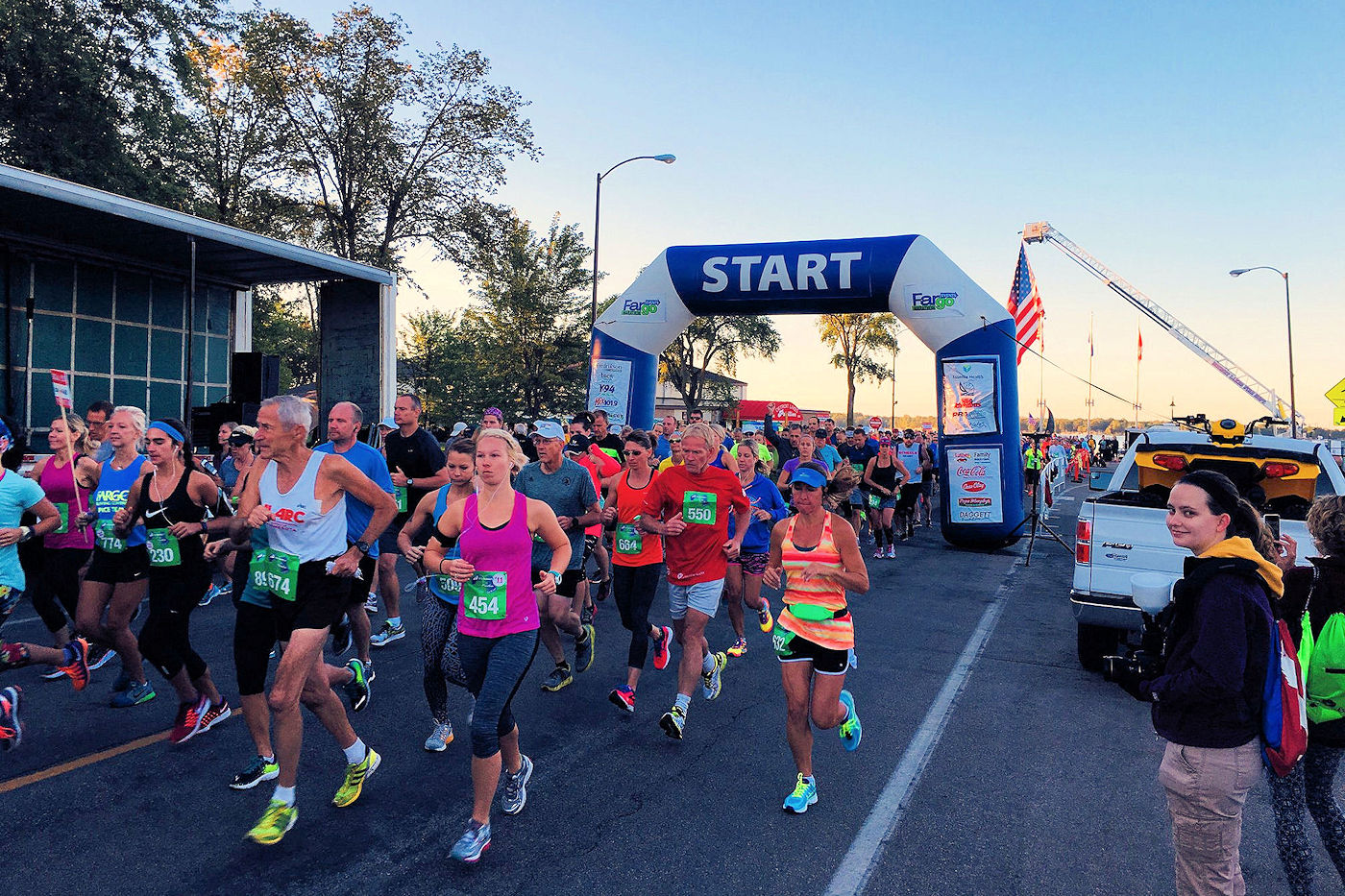 Make your plans to participate or watch the 2023 Dick Beardsley Marathon on September 9, 2023 which begins at the Kent Freeman Sports Arena on Rossman Avenue in Detroit Lakes, Minnesota. Slip on your running shoes for the Dick Beardsley Half Marathon, 25k, 10k, 5k, and Youth 1 mile runs. Most races treat you to scenic views of Detroit Lake with cheering fans to keep you moving along. Plus, the LEGENDARY Dick Beardsley comes home every September to welcome runners from around the country to run in this fall classic! When you pick up your race packet Friday evening be sure to join the fun at the Pasta Dinner (see below) and Dick Beardsley’s presentation.

While the focus of the event is the Dick Beardsley Half Marathon, there will be shorter races that the entire family can enjoy. These include the Youth 1 Mile Run, 5K Walk/Run, 10K, Half Marathon and the 25K run.

NOTE: This schedule is tentative & based on prior year. Check back later for update or visit official website. 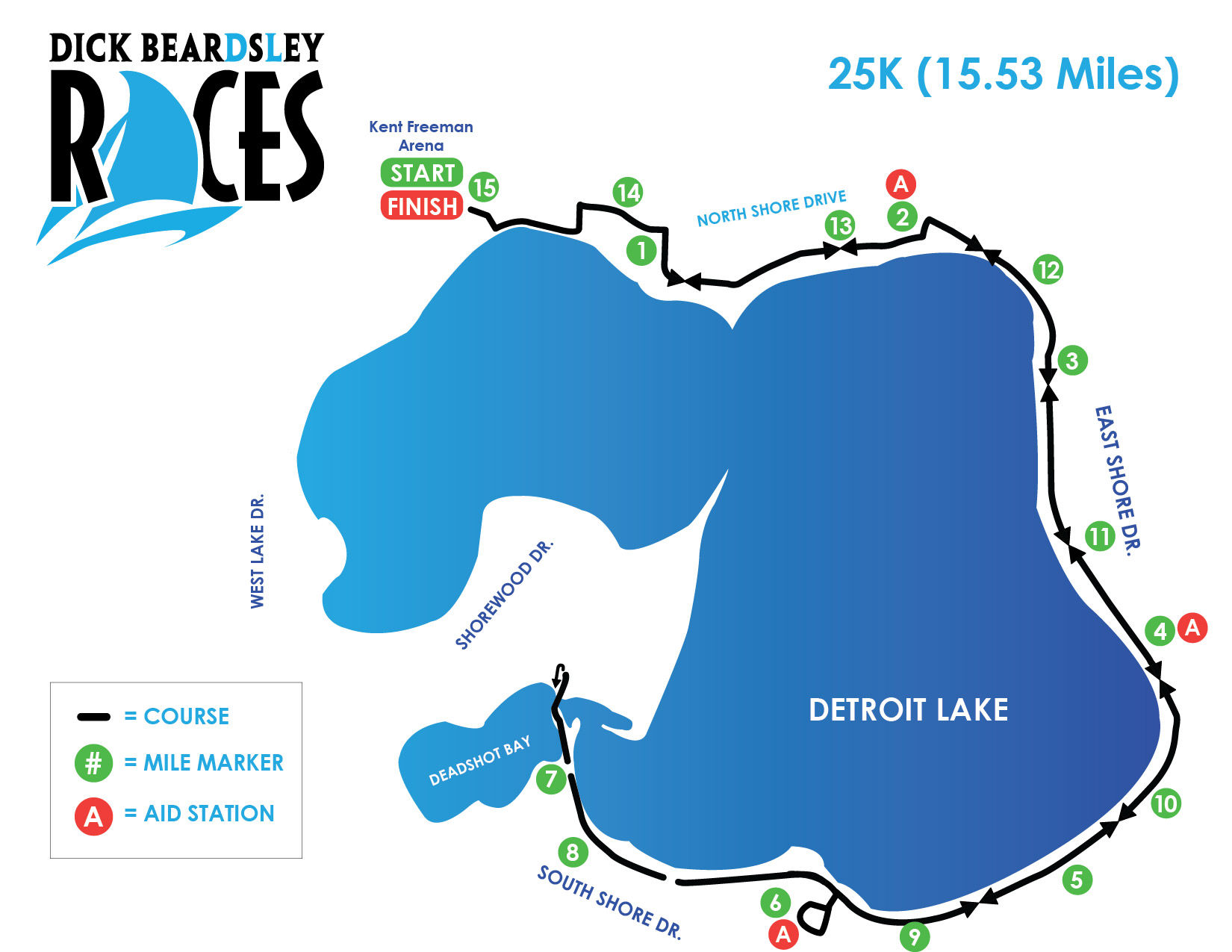 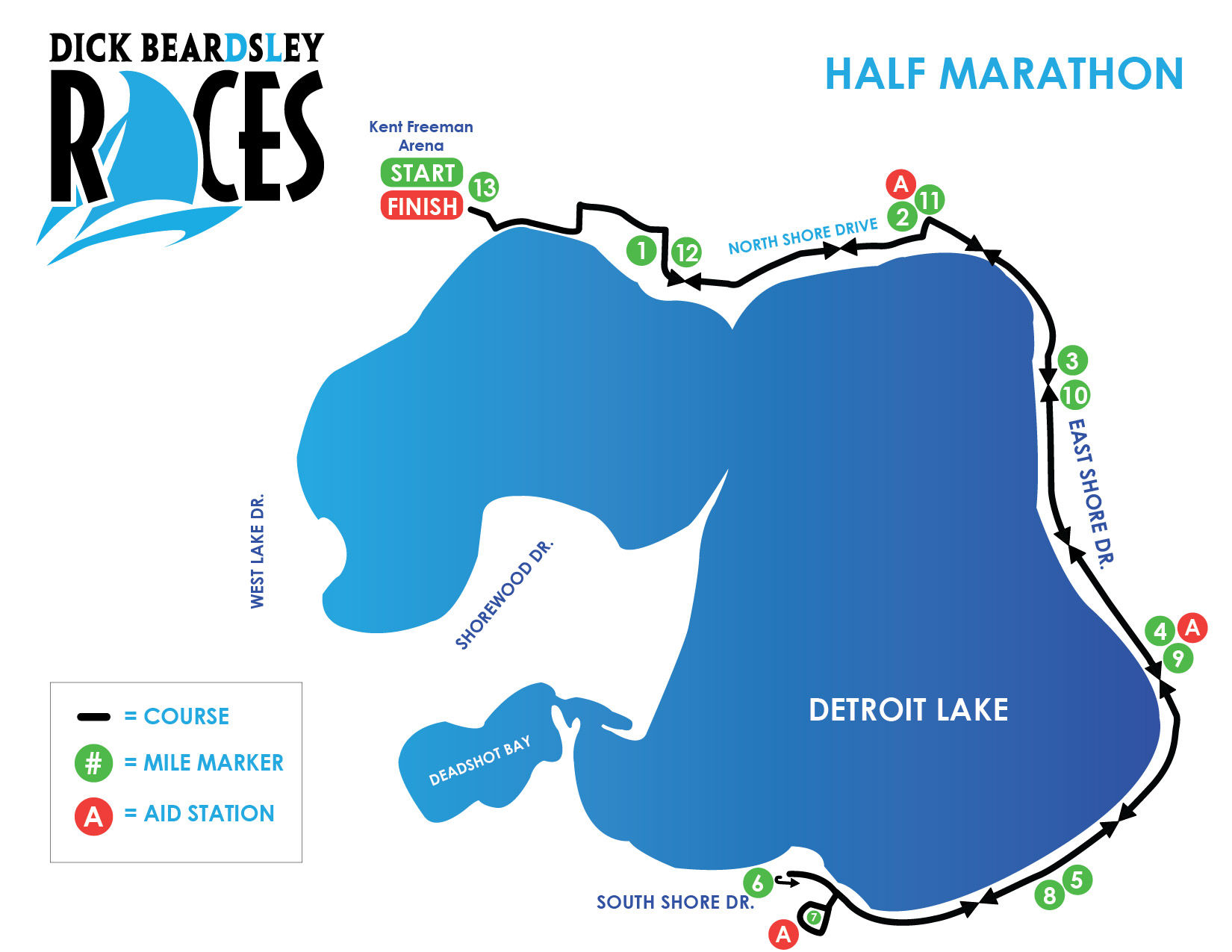 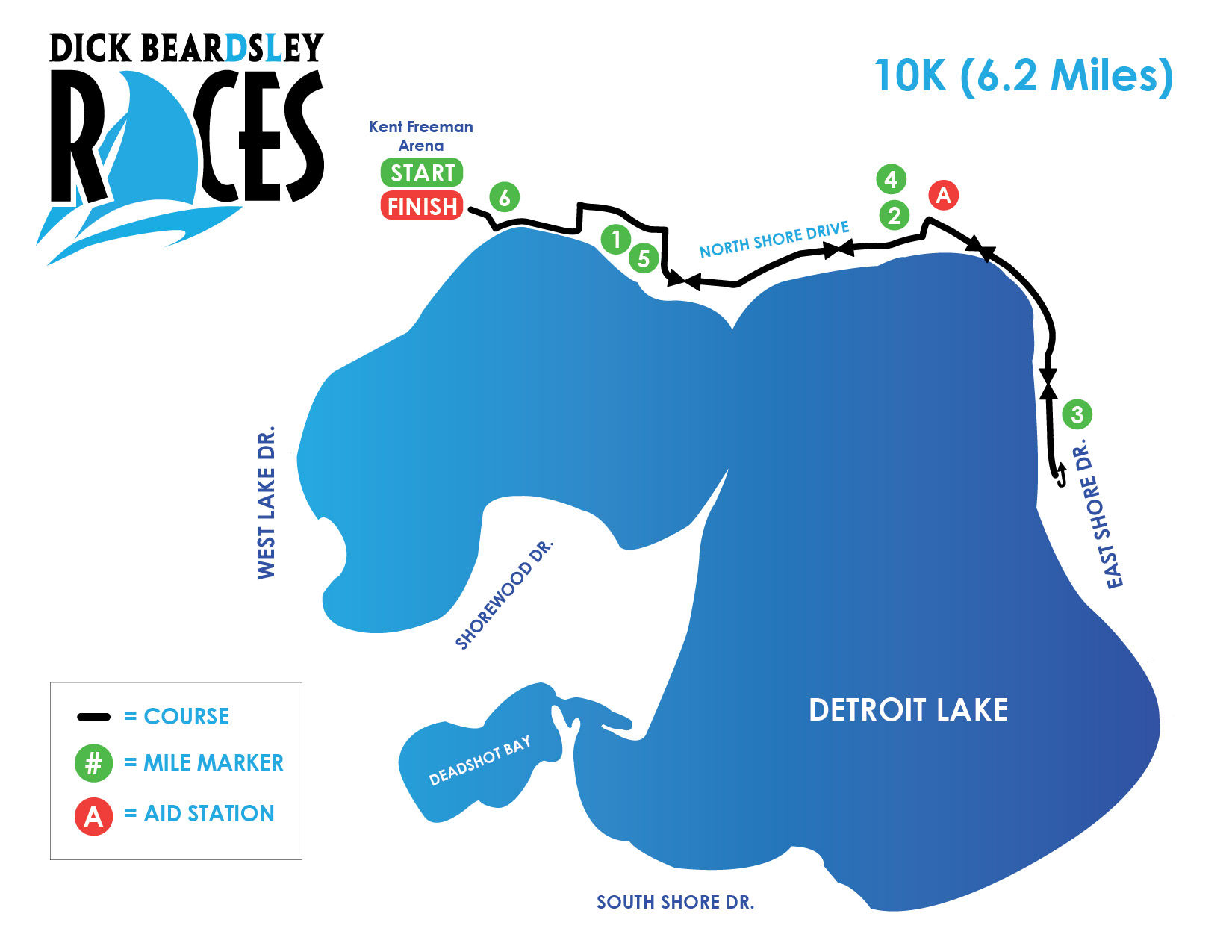 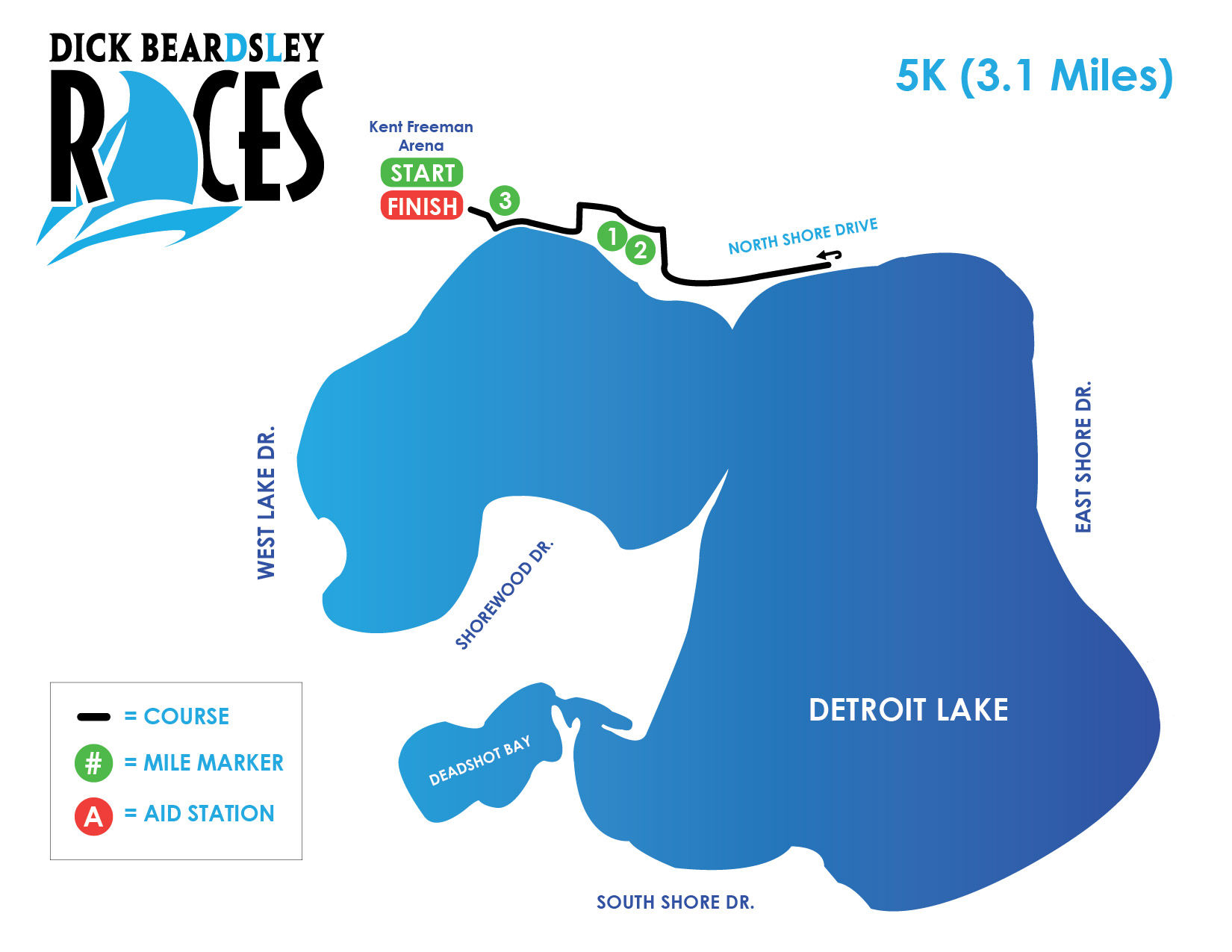 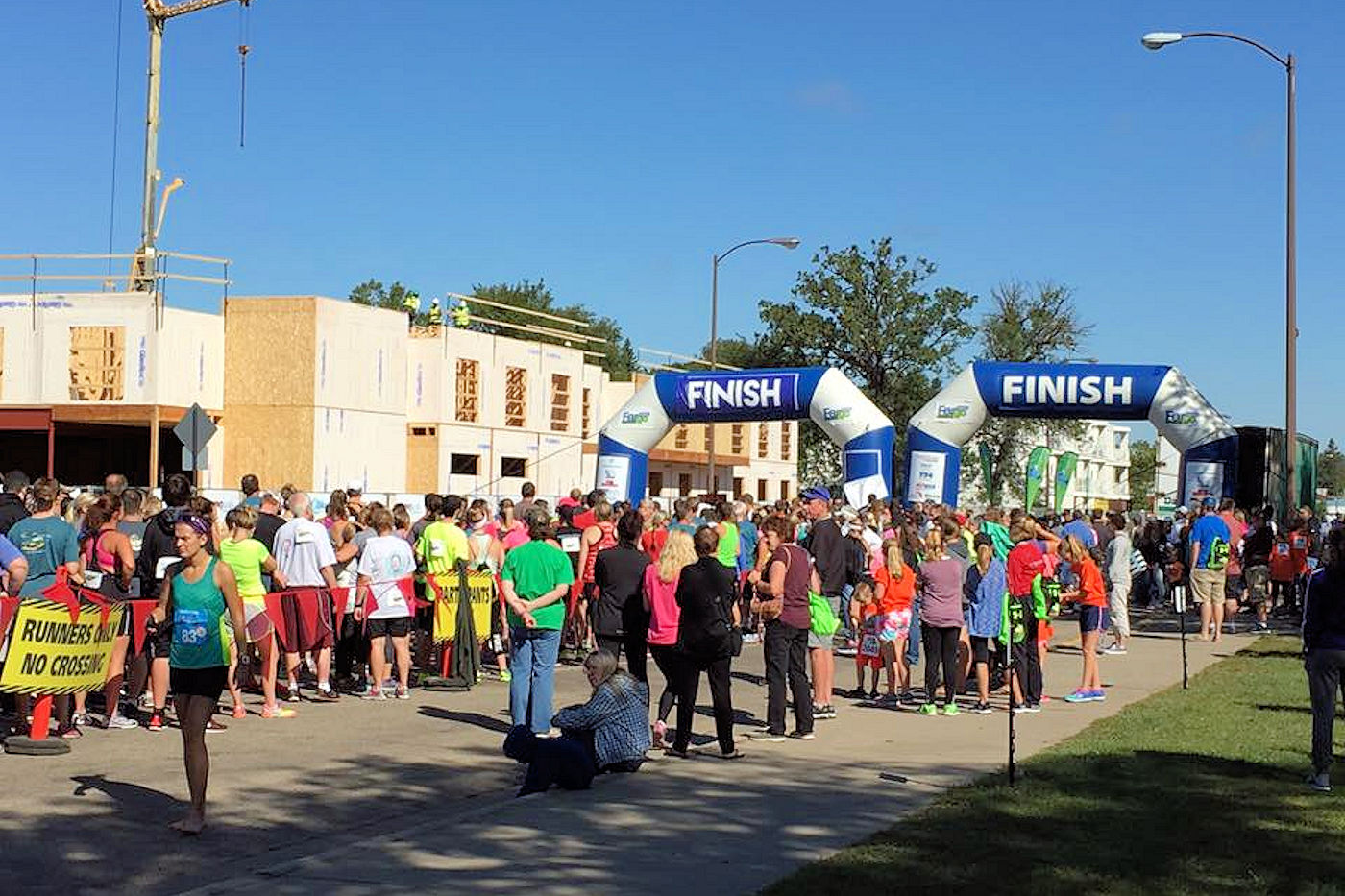 NOTE: This schedule is tentative & based on prior year. Check back later for update or visit official website.
3:00PM-8:00PM Packet Pickup & Registration @ Kent Freeman Arena (if event hasn’t sold out)
6:00PM A fan favorite tradition of the Dick Beardsley race weekend. On Friday night before your race, join legendary runner Dick Beardsley himself for an awesome pasta dinner brought to you by Brygge Taps & Tastes & The Hub 41. Dick will be there to speak and more than likely sing a few great songs! (Kent Freeman Arena)

After Party at Zorbaz

NOTE: This schedule is tentative & based on prior year. Check back later for update or visit official website.
At the finish, expect LIVE MUSIC & great post-race refreshments (ice cream is our favorite)!! After you leave, head over to the local establishments for the best food and drink around! Zorbaz, Lakeside Tavern, Hub 41 or Long Bridge are all local favorites!

How do I register?

You can register online at our secure site. Click on the Register Now tab and follow the directions. Remember: there are no refunds, cancellations, or deferrals to future years. Online registration will close on September 9th at 11:59PM. Registration for the half marathon, 25k and 10K will close when each of these events reach capacity (see below). On race weekend, you may still register for the Youth Run and 5K at the Kent Freeman Arena Packet Pickup/Expo.

Is there a capacity limit on the distance events?

The Dick Beardsley faces both logistical and materials constraints, necessitating the existence of a capacity limit on these events. We have a cap of 1,000 for the half marathon 25k and 500 for the 10K. The 5K and Youth Run do not have caps on them. The caps exist to ensure that all participants receive a safe and enjoyable experience along with the perks promised to them.

What events do you offer?

We offer a half marathon, 25k, 10K, 5K, and the Pro Systems Youth Run. The Packet Pickup/Expo is open Friday, September 10th 3PM-8PM. Early morning packet pickup is available on race morning at 6:00AM-10:30AM. However, you must have your packet picked up at least 60 minutes prior to the start of your race.

Are there pacers for the half marathon?

Is the course hilly?

The half marathon course is described as 70% flat and 30% rolling hills.

Strollers are allowed in the 5K. They are not permitted in the half marathon or 25k. They adult must be a registered runner wearing a bib. The child must stay in the stroller throughout the race.

What is the temperature in Detroit Lakes that time of year?

Where can I park on race day?

There is ample parking in the parking lot of the Becker County Fairgrounds located adjacent to Kent Freeman Arena. Washington Park has some parking as well. Do not park on main roads or roads marked “No Parking” since many are part of the course.

Will there be energy gel on the course?

Yes, GU will be available at mile 7 on the half marathon course.

How far apart are the water stations?

Water stations are located approximately every 2 miles on the course.

How long will the course be open?

The half marathon/25k course will be open for 4 hours (equivalent to an 18 minute/mile pace). There will be a support vehicle traveling behind the slowest finishers.

Do I receive a medal?

Yes, all half marathon, 25k, 10K, 5K and Youth Run finishers receive a medal. The medal will be different for each event.

Can I change events or transfer my entry to another participant?

Yes and yes. You can change events or transfer your entry to another participant on the Registration page of the website. There is a $10 administrative fee for changing events and transferring your entry. If you change to a higher entry fee event, you must pay the difference. All changes must be done online prior to 11:59PM on September 1. You may only change to a different event if the event that you want to change to still has availability. For example, if the half marathon is sold out, you may not change from another event into the half marathon. To change events, click here. Switching events or transferring entries is not permitted at the Expo. These changes must be made online by 11:59PM September 1st.

Can I sign up for the half marathon and just run the 10K course?

Participants are discourage from running an event other than the one that they are registered for. Those who choose do so on race day, will be able to cross the finish line, collect a finisher medal, and enjoy the post-race celebration, but they will not appear in the posted results for the event. Participants will only receive t-shirts and medals that correspond to the event represented on their packet or bib number regardless of which event they actually run. For example, a registered half marathon participant who chooses to run the 10K on race day will only be able to receive a half marathon medal and a half marathon t-shirt.

When is the last day to register?

Where do I get my race packet?

At the Kent Freeman Arena located on Rossman Avenue! Packet Pickup is available Friday, September 11th 4PM-8PM and again on Saturday, September 12th 6:00AM-10:30AM. You must have your packet picked up at least 60 minutes prior to the start of your race.

Can someone pickup my packet for me if I am unable to do so?

Yes, they would just need your name.

What type of wheelchairs are allowed?

Push-rims are the only style of wheelchair allowed. The top 3 male/female wheelchairs are recognized in each event.

Are there bathrooms on the course?

Yes, there will be bathrooms available (typically porta-potties) at every water station along the course, or approximately every 2 miles.

Where can I shower after the race?

The Detroit Lakes Community and Cultural Center (826 Summit Ave.) will offer free showers to race participants after the race. You will need your race bib when you check in at the front desk. There are no showers available at Kent Freeman Arena.

How many timing mats are there?

In addition to the start and finish line mats, there well be on-course timing mats at miles 6.2, 13.1 and 20 for the full marathon.

How do I get live results?

All of the timing mats will provide live updates via email and/or text message.

Sorry, there are no refunds for cancellations

History of the Dick Beardsley Marathon

Dick is referred to as a running legend in the United States and is best known for his incredible race in the 1982 Boston Marathon. On a very hot day, that race was dubbed the “Duel in the Sun” as he battled world recorder holder Alberto Salazar down to the finish line. Both broke the American record: Salazar won a record time of 2:08:51; Beardsley’s time was 2:08:53, finishing 1.6 seconds later, placing second. He was at the height of his professional running career.

In November 1989, tragedy struck Dick’s life. While using an auger to lift corn into a bin on his Minnesota farm, Dick became entangled in the machine as it literally began to tear him apart. Not expected to live or walk–much less ever run again–he managed to survive.

But that was just the first of a series of events that would forever change his life. During the next few years, Dick was involved in a severe car accident. Later he was hit by a truck while running and later still, rolled his vehicle in a snowstorm. Finally, while hiking one day, the ground gave out beneath him and he fell off a cliff. Each time he ended up in the hospital and had multiple surgeries to try and put him back together.

Due to the large amount of pain medication he was taking, he became addicted–and that’s when his life really started to spiral out of control. It has been a long an difficult road back, but Dick has been celebrating every day of his sobriety since February 12, 1997. 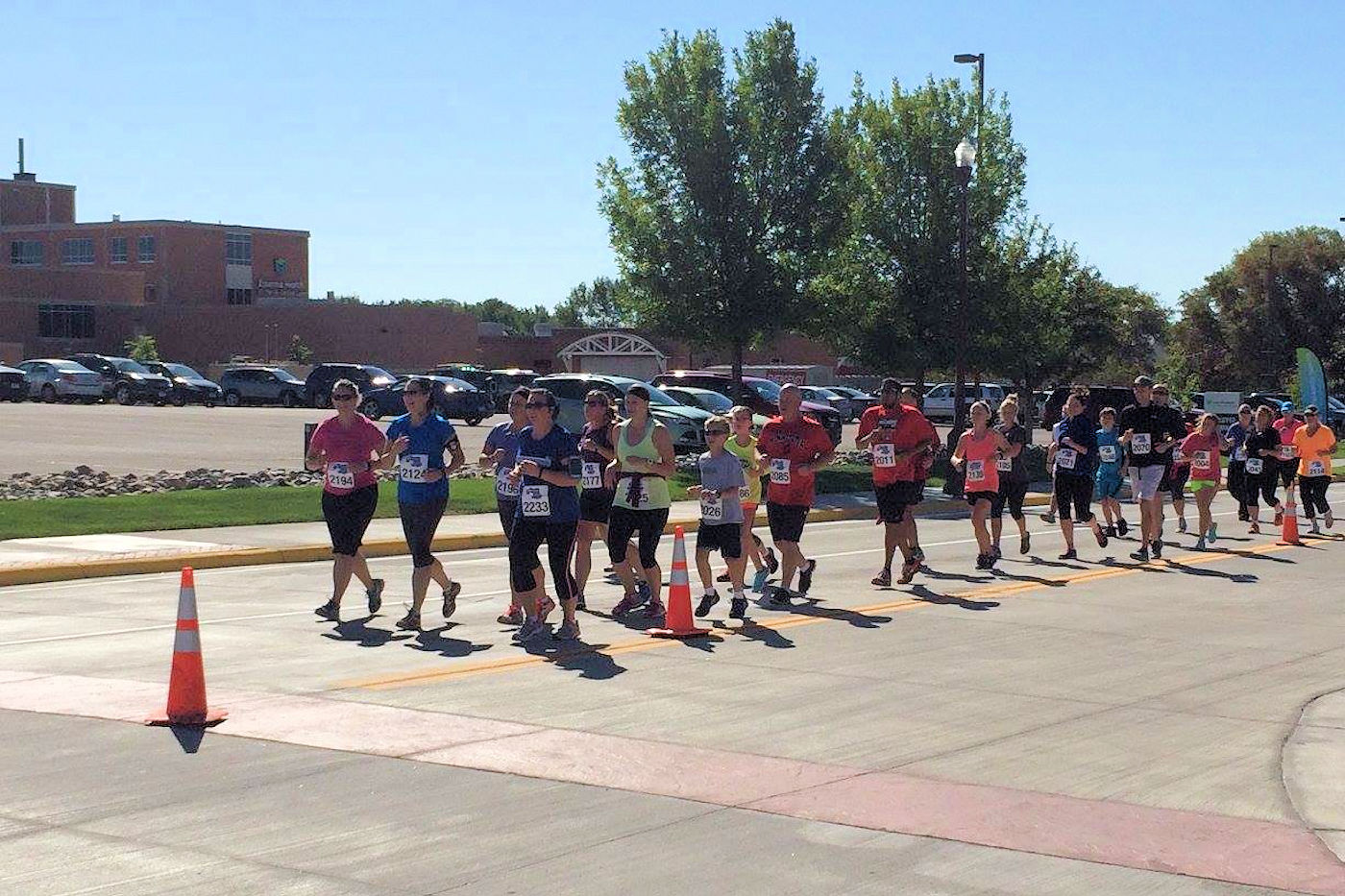 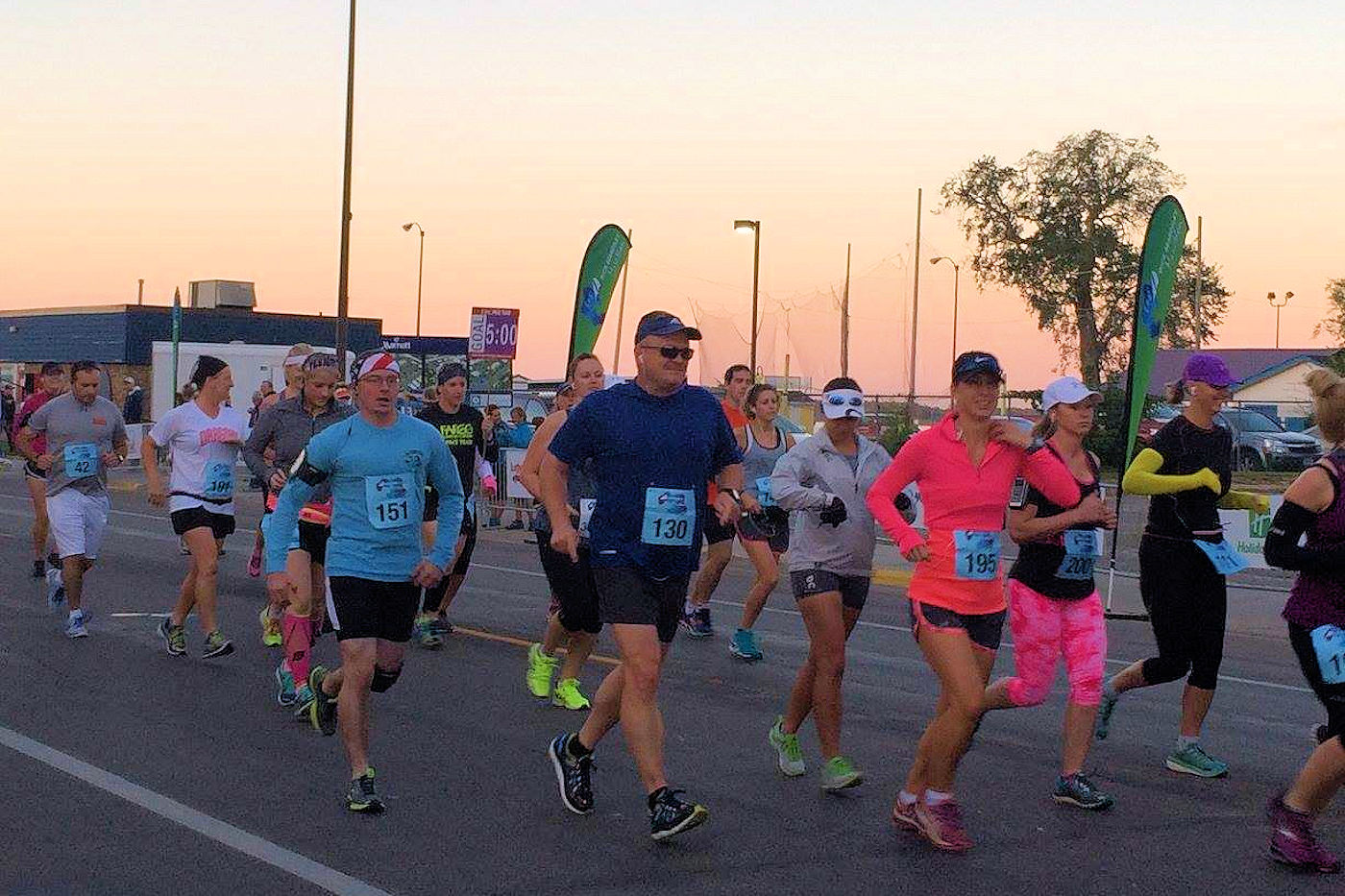 Mark your calendar today so you don’t miss the next Dick Beardsley Marathon in Detroit Lakes, Minnesota in September!