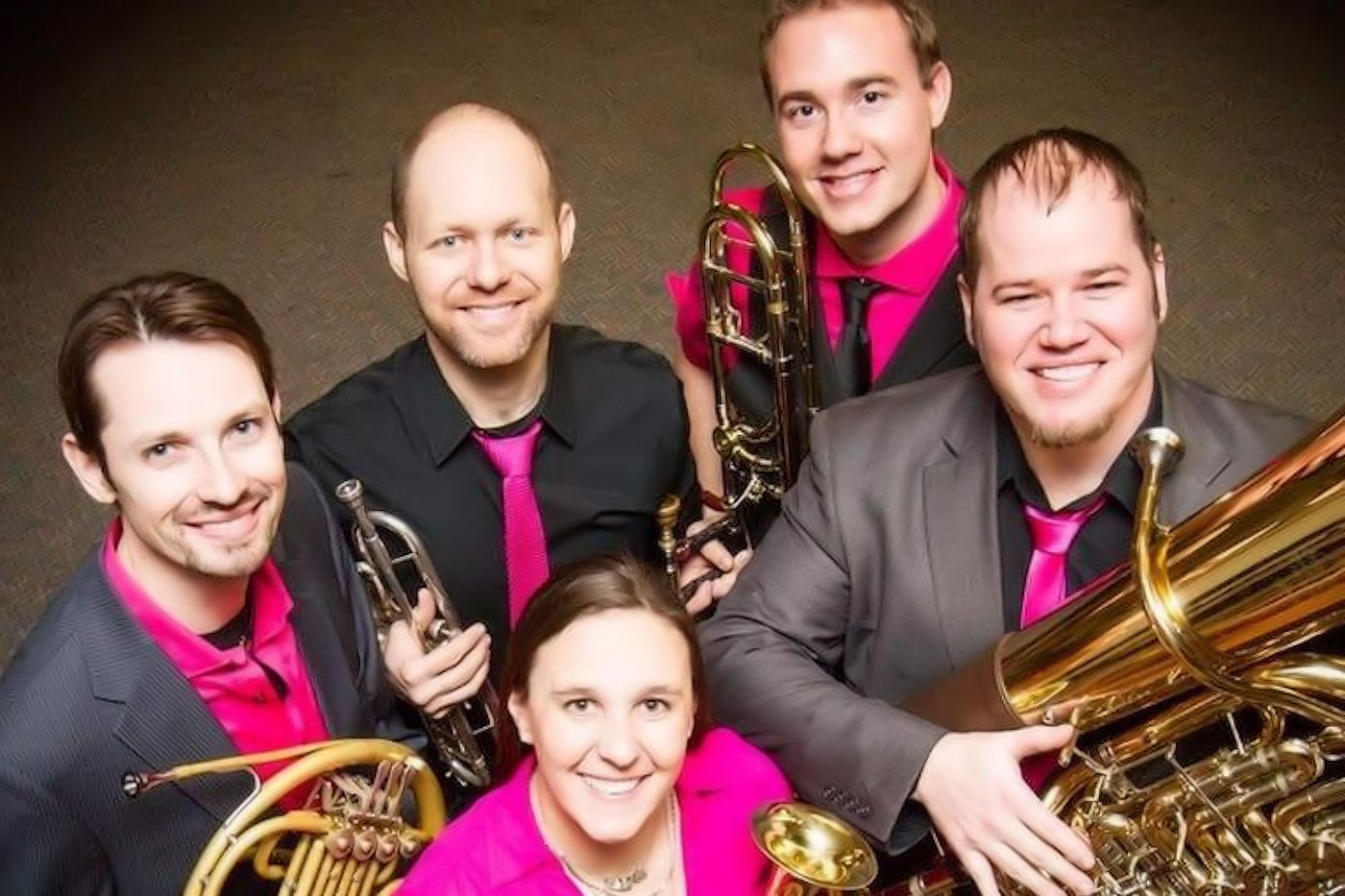 A night of bell bottoms and brass! Join Copper Street Brass at The Historic Holmes Theatre in Detroit Lakes, Minnesota as they cover popular 70s music from three decades: the 1770s, 1870s, and 1970s! From the big wigs of Mozart to the big hair of STYX, you’ll think of the 70s in a whole new way.

The mission of the Copper Street Brass is to represent the Evolution of the Brass Quintet. Through inventive concerts, engaging educational programs, and original musical arrangements, we bring a fresh perspective to instrumental music. To express our artistic voice, we use a dazzling fusion of brass, keyboard, guitar, percussion, and electronic instruments to appeal to a universal audience and go beyond ordinary. This is why the Copper Street Brass matters: we de-compartmentalize music through bold and innovative programming that breaks free from your favorite playlist or expected concert experience. We present an unparalleled variety of music on every single performance, and this variety has become the calling card of the Copper Street Brass.

Allison Hall: A native of Wisconsin, Allison Hall earned a Bachelor of Music degree in Music Education and Trumpet Performance from St. Olaf College in Northfield, Minnesota and completed her Master’s degree at The University of New Mexico studying with Dr. John Marchiando. Allison is an S.E. Shires Performing Artist. She is a founding member of the Copper Street Brass (CSB), performing more than 150 concerts and educational programs each season. In addition to her work with CSB, she has performed with the Minnesota Orchestra, VocalEssence, the New Mexico Symphony Orchestra, the Santa Fe Symphony, the new music ensemble “Chatter” and dozens of other groups. She has served as Adjunct Instructor of Trumpet at St. Olaf College and has taught more trumpet lessons than one can count from beginners through college students to adults.

Josh Cameron: A graduate of Anoka High School (go Tornadoes!), north of the Twin Cities, Josh Cameron is the only native Minnesotan in Copper Street Brass. He earned his Bachelor of Music Degree at St. Olaf College, under the tutelage of Dr. Martin Hodel, and his Master of Music at the University of Minnesota where he studied with Dr. David Baldwin and Gary Bordner, formerly with the St. Paul Chamber Orchestra. Josh has also studied jazz/commercial styles as well as other performance techniques with trumpeters Kelly Rossum, Eric Jacobsen, and opera vocalist Audrey Stottler. Widely known as a versatile freelance performer in the Twin Cities and Upper midwest, Josh also spends many of his evenings getting his high note workout in (and also workin’ his dance moves!), playing lead trumpet with the funk/soul group High and Mighty. On the other side of the horn, he has appeared with several regional orchestras and chamber ensembles such as the Wisconsin Philharmonic, Metropolitan Symphony Orchestra and Minneapolis Civic Orchestra.

Nick Adragna: With his performances described as “flawless”, tubist Nick Adragna has enjoyed a busy performing career across the country, performing in ensembles and as a soloist, as well as teaching tuba, euphonium, and trombone. He began his musical studies in Texas and went on to complete his Bachelor of Music degree in Tuba Performance at Oakland University in Rochester, Michigan with Dr. Kenneth Kroesche. While at Oakland University, Nick twice won the Pontiac Oakland Symphony Concerto Competition and served as the orchestra’s principal tuba for four years. He was also an active competitor outside of school and placed in the finals for three years running at the national level of the Music Teachers National Association’s Young Artist Brass Competition. He joined Copper Street in June 2011 and holds an active low brass studio in the Twin Cities. When not performing or teaching, Nick can be found on many long walks around the many beautiful large bodies of water that Minnesota has to offer, come rain, shine, or snow…lots of snow! Nick is an avid reader and music lover. He also loves sports and has been known to hop on the bandwagon for any Detroit sports team when they’re doing well.

Tim Bradley: Tim Bradley is a versatile multi-instrumentalist, performer, educator, producer, music creator, and entrepreneur. Tim is co-founder and Artistic Director of Copper Street Brass, a full-time brass ensemble based in Minneapolis, MN, where he performs on horn, guitar, piano, synthesizers, and percussion. With Copper Street, Tim has created well over 300 unique arrangements and compositions for brass, and is passionate about evolving instrumental music into modern day relevance. He molds music typically not originally written for brass (i.e. orchestra, piano, voice, jazz combo, rock band, etc.) into artistically entertaining and exceptional arrangements for instrumental performers. This music spans the majority of music history: from Gregorian chant to Mozart, Dave Brubeck to Pat Metheny, Led Zeppelin to Queen, the Beatles to David Bowie, Paul Simon to Stevie Wonder, Radiohead to Adele, musical theater to movie soundtracks, and much more. Tim is an active performing presence in the Twin Cities live music and recording scene, and is comfortable performing in classical, jazz, pops, and commercial styles. He is a member of the Minnesota Opera orchestra and is often seen performing with Minnesota Orchestra and Saint Paul Chamber Orchestra. His horn playing can be heard on many notable musicians’ records, and in 2015 Tim recorded for Prince. Tim plays guitar in two rock bands (Treehorn and The MOB) who cover everything from the Beatles and Tom Petty to Alice in Chains and Rage Against the Machine. A long-time guitar tinkerer, Tim incorporated his own electric-guitar making business, Nightjar Guitars, in 2021, specializing in using reclaimed and salvaged materials to build hand-crafted custom electric guitars.

Erik Barsness: Erik Barsness grew up in South Saint Paul, Minnesota and started playing percussion in his elementary school band. He received his Bachelors Degree in percussion performance from the University of Minnesota. Erik lived in Stockholm, Sweden where he studied for 3 years at the Royal College of Music in Sweden. He graduated with his Masters Degree in percussion from the Royal College of Music and received a Fulbright Scholarship for these studies. Erik has performed throughout the world as a soloist and as a member of various ensembles. He performs regularly with the percussion group CRASH, with performances throughout the US as well as tours to Russia and Cuba. Erik is the percussionist with the Minneapolis Pops Orchestra and has performed with many Twin Cities musical organizations including the St. Paul Chamber Orchestra, Vocal Essence, MN Children’s Theater, and MN Dance Theater’s annual productions of “The Nutcracker” and “Carmina Burana.” Erik has received several awards from the American Composers Forum, the Jerome Foundation and was a finalist for the McKnight Fellowship along with members of the Minnesota Percussion Trio. In addition to his active performing career, Erik maintains a private teaching studio of in-person and online lessons. Erik is fascinated by languages and if he wasn’t a percussionist he would be a linguist. You can find more about Erik at www.ErikBarsness.com

Alex Wolff: Alex Wolff has quickly gained a reputation as one of the Midwest’s most versatile trombonists. Principally a tenor trombone player, Alex also performs frequently on alto trombone and bass trombone. After graduating from high school in his hometown of Mandan, North Dakota, he earned his BM in Performance from the University of Minnesota. Alex has performed with many diverse groups throughout the Midwest, including Copper Street Brass, Minnesota Orchestra, VocalEssence, and Davina and the Vagabonds. In the summer of 2008, Alex was selected as one of only 21 members of the Disney All-American College Band. He spent the summer performing with some of the world’s elite musicians including Alex Iles, Jiggs Whigham, Rick Baptist, and the Army Blues Band. In 2014, Alex was selected as a finalist for both the Eastern Trombone Workshops’s National Solo Competition and the prestigious Frank Smith Solo Competition at the International Trombone Festival. His multifaceted trombone sound can be heard on all of CSB’s recordings, as well as on legendary Grammy award winning blues artist Big Walter Smith’s album “Royal Blue Cadillac”. Alex is an S.E. Shires Performing Artist.